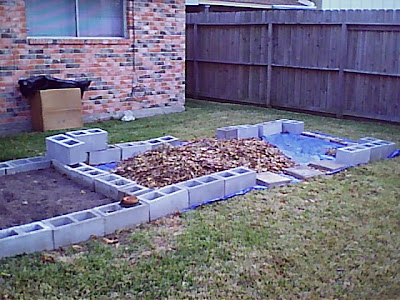 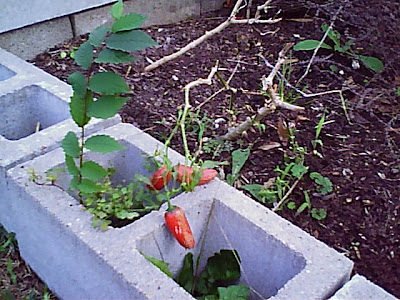 No; no pictures of your Satan, nor his voice from playing the records backwards (never did figure that trick out...)
I'm toying with a gift from "Santa" [aka me mum!]. I downloaded the images in order that I wanted them to appear to show progression, but alas! the last loaded on the top o' the page!
[Help, ye more technologically literate!] [ Got it now;. Y'all suffer through for the night; the next time they'll be in desired order! Saves me having to change the title of the post... A most daunting task...!] So anyhow, here is the newly expanded garden; I received permission to 'kill some more grass' [too bad it weren't the smokable variety!] and more than doubled the growspace in the process...
The area covered by the blue tarp is ~5' wide [inside the masonry bricks] by ~12' length.
The photo view is from the N.E corner... That's my bedroom window ( with 'Smoky Kitty' hop box (ladder) underneath...)

The next photo was taken early Jan 2009. While heading out to weed the garden, I believed all the previous summer's plants frost-dead. Lowen B. Hauld [my optometrist! you should call his orifice...], these sneaky faux peppers were fruiting down in the cinderblock hole [would that I were so lucky!]; (faux: the pepper variety is called 'Fooled You'. They look just like a jalapeno, but are a 65-day maturing mild knock-off (boy will I have some fun with THESE this summer! Ha!). Nanny ( me grams... her yard!) says the plants have come back on their own two years running. Gotta love the Gulf Coast for gardening weather! 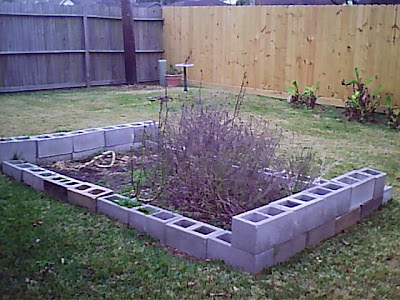 This was the photo I wanted to open the blog with; the day I went out to begin expansion. This is the view from the S.E. corner. Our father Sol still riding his chariot so far south through the skies, the northern bricks are only now beginning to get sun... but @ ~ 33 degrees longitude the entire bed will receive more than 8 hours' light come the Vernal Equinox, and about 12 hrs. thru the solstice.
Molly, give me the heat ANY DAY! Texas bred and cornbread fed, baby!
Ha!
I can't wait until posts here show even more progress... I know the compost pile needs be moved before the tarp is removed for bed expansion (the bed, as seen in this photo, is ~5'x9'; the expansion keeps the 5' width but adds ~12' length, for a total bedding area of 5x22, or `122 ft^2.) But what I mean is, when the pictures show melons, cucumbers, tomatoes, okra, beans... you know; standard kitchen edibles!

Y'all folks take care. See ya on the morrow...

Cygnus
Posted by Cygnus MacLlyr at 06:01

LOL Cygnus, if I could give you half our heat you can bet your bottom dollar I would!

The project is going to be wonderful...WTG!

We grow those peppers to keep the salsa from being too hot. Kids love their salsa but don't like it too hot. Had an eggplant try to overwinter. Had been mowed down & was growing pretty good until an ice storm. It was a surprise as I had always read they are gone below 50.

Hi Molly!
I'm not sure you haven't been successful in heating it up Houston way-- it's up in the 60's(F) today!
Don't know if that's making it cooler there... gotta word those things carefully...
Thanks for the "heatwave" ha! and for coming by!!

Stephanie,
Sounds like a great idea! So much vitamin C in peppers, too; can't hurt!
Wow, too bad the eggplant got mowed! Would have been a really hardy plant if it had made it! I've heard they aren't cold-tolerant (or 'cool tolerant!) either...
Oh, i misread-- the ice got it. THAT is the eggplant I know! Still, too bad...ha!
Stay warm up there; thanks for zoomin' down a little farther south!