Been out playing in the dirt and near 80-dedree F sun most of the time it was out...
Too pretty to sit inside, and too broke to venture forth (the day and me, respectively!) into the concrete jungle to do... whatever it those is venturers-forth do.
So having bought a few new garden implements over the last several months, and a blue garden 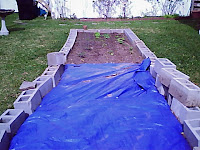 in need of greening, I thought I'd don tank top and elbow grease and see what came.

Here's the spot as seen at the start of the day... 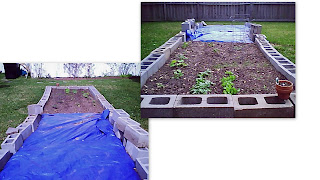 About the only problem encountered was the coax cable which diagonally bisects the new grow area. I solved the future access and tiller-snack prevention by sacrificing a little grow space for a meandering walkway... 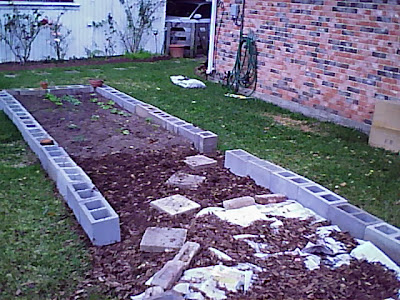 In the above photo, you can see the area to the right of the walkway covered first in newspaper and then in leaves. The leafy area will serve as compost pile for now. The newspaper is not only now recycled but serves to help kill the underlying grass (so we can get more tasty vegetables in!), and will also be a haven for:

One benefit of some of the stubborn grass still growing (one reason I let half the new area go to compost-- kill that off proper) and the recent tarp coverage was these handy little critters: 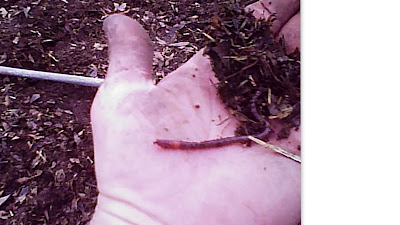 Tossed every one I could into the existing vegetable bed!

Speaking of which, you can see the little greening things in some of the pictures. Not so much growth as I had hoped for over the last two weeks, but maybe I'm being a bit impatient-- it is only the first week in March.

So, I put more tomato and green bean seeds between the existing plants where I saw room for a buddy to grow, too. And for S&G's thumbed some Crimson Sweet melon seeds (an heirloom variety...) down between the walk bricks and the compose area. We'll see! :D

At the end of the day I have come away with increased growing ground, an annual lease spot for the compost, and an aesthetically improved area with practical purpose to boot. 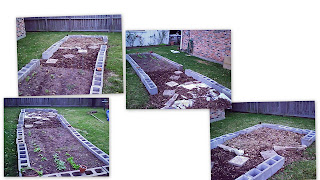 Cygnus
Posted by Cygnus MacLlyr at 00:39

Looking good, Nephew! Just think...it serves to keep you off the streets and out of the pool halls!

No dart boards in houston pool halls.. why bother?

...(kinda related)...call MissDig(or your states equivelant)long time back in michigan,i lost almost half of my garden because of a ruptured water line...i didn't know it was there,frost line up there is 36" deep,anyway,if you don't know whats under yer ground,find out before yer 'investment' begins

You have completely inspired me to get out and try to add a little spring to my backyard! (I live on four acres of desert, but I will soldier on!) I miss living back East in the spring and fall especially! It seems to feel the same in AZ year round...except for July and August when it feels like 35 levels of hell!

Great project for a great day. Here in KY we are still waiting for our growning season, can get frost up to mid May. May be working on the greenhouse this week and get a few things started, can't wait to get my hands in the dirt. Good post brother.

Ken-- good point! I lucked in to knowing where the cable was when I hand-prepped the new area the 1st time versus charging right in with a tiller...

Bee and Rose-- if nothing else, do containers! Use tomato cages right in the pot, or twine and nails or staples to a fence for vining beans, melons, etc...
Go for it, my friend!
Thanks for the visit!

Hey Bullseye! Good to see ya!

But then, without at least a similance of the fourth season, I can't do a proper orchard...

I ventured forth. Sallied, even, casting a glance o'er my shoulder at my lonely, neglected garden, with a vague feeling of guilt that I really should be planting on such a nice day...
But I had my sights on visiting a new (to me) gun shop in Georgia, and perhaps the purchase of a new (again, to me) Mosin-Nagant M44. In case you didn't know, the M44, stoked with military surplus ammo (preferably dug out of some farmer's field near Budapest) does a GREAT job of helping you have the range all to yourself. One magazine full, and everybody is looking at you to see if you're gonna continue shooting that damn thing. Twenty rounds later (about $1.45 worth, if you bought your ammo when I did), they're all packing up and leaving, giving you dark looks on the way out.
Unfortunately, it didn't happen. The shop owners apparently decided to start their Daylight Saving Time a day early.

For time alone, sounds like a darned good $1.45 invested.

I'd count the dark looks as bonus.