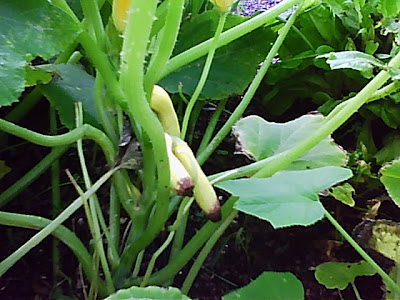 Let's start with the woe..

Can anyone explain this browning on the squash? Granny said last years' crop did the same thing..
Could it be too much "cat help"? Too much moisture? Early fruit that the plant is culling naturally?
Just very few of the myriad yellow ones that aren't, at some point, succumbing...

Otherwise we're moving along all right. Green beans never got above 10" tall; I suppose it's still early in the season, though. And I've gathered nearly 2# off them so far... 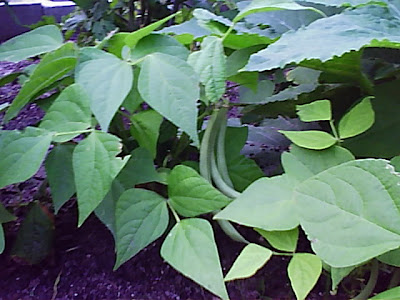 Finally got a bit o' reddening on that freaky tomato plant: 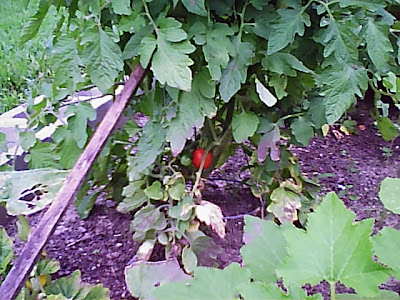 Largest bush; smallest fruits!Ha! They group like roma, look like cherry.. at least on this vine. The smaller vines-- 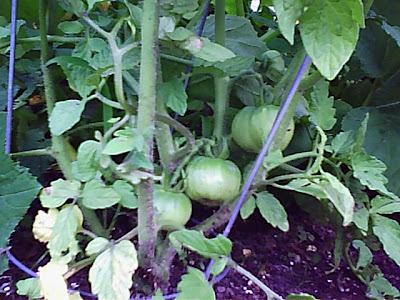 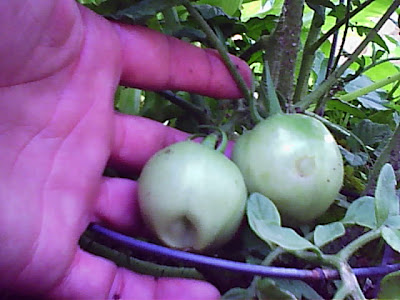 have about double-golfball sized fruits.

Store-bought cantaloupe filler, thrown out to compost, is in full bloom. 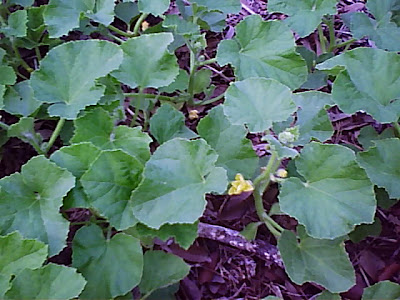 Containered cucumbers are trying, and the Colorado Red beans, right out a 20# prep-sack, are mimicking the green beans-- small but flowering profusely. 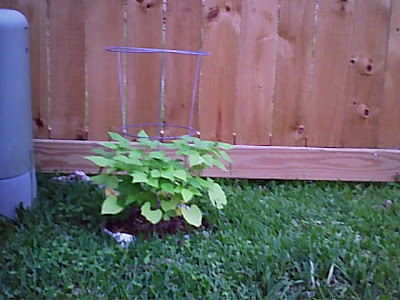 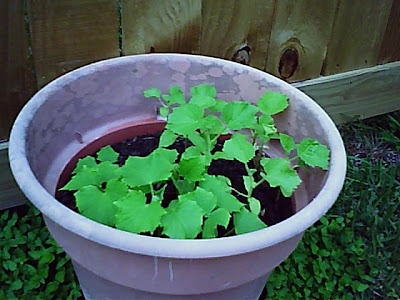 And the heirloom watermelon has decided it finally hot enough to make a runner or three... 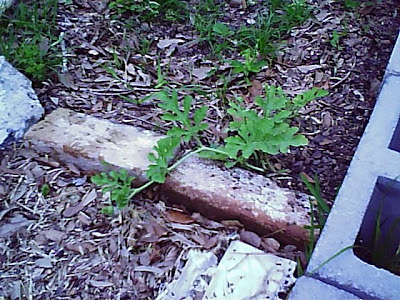 Lettuce will soon come out (being diligently consumed away!) to make room for either okra or more bell-type peppers. Overall, for such a small chunk o' dirt, I'm relatively happy. And listening to yall in more northerly climes report weather... I'm gonna have to either reconsider my future growing and home spot, or become REALLY proficient @ greenhouse growing! LOL! Can't imagine, here it is May and NOT having dirty fingernails for a good couple months now... 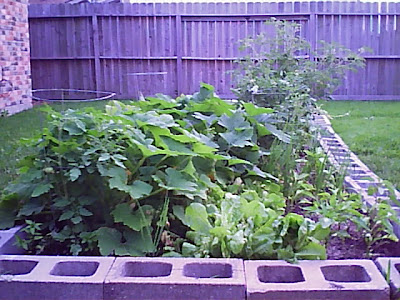 Oh, don't worry; I'll adapt. I'll bitch and moan excessively when that white, flaky stuff continuously thwarts my efforts, but... be worth it to be in NOT HOUSTON!!!

O.K., I've tortured you "yankees" enough for one weekend. I've got a turkey on rye that's BEGGING consumption with a home-grown, vine-ripe tomato...

Cygnus
Posted by Cygnus MacLlyr at 21:19

Hey my man, garden is looking great brother. As for the squash, I'd cut the vine just above the fruit and get those things off of there man. New bloom will come soon. Looks like a blite (sp?) or something to me. Other than that them thumbs are green brother. STAY SOUTH if you can. Even here in KY we are just now getting into growing season. I love having the 4 seasons but, I love my garden even more.

Thanks, Bullseye...I thought some kinda blight too, but if year after year..
One or two of the larger squash are doing ok-- Just this minute was watering, and will have the first one off the vine tomorrow or next...

Think I'll work in cohorts with the Uncle and do the orchard and cold-loving berries/veggies in the Ozarks, and winter in the desert... never hurts to have options, does it!
Thanks, Bullseye my man!

Cygnus
Garden looks good buddy!
But you just have to keep rubbing it in now don't ya.
Still freezing here in the great northwest high desert!

Rod-- LOL! I just gotta enjoy the Third Coast, so long as I'm here...
I do loath the day I'm Ozark way and some stuck-in-the-city shcmo is rubbing.. AAHH!! But he'll be rubbing in pollution, toxins, stress, drive-by's...

I'll be basking in fresh-caught bream, heirloom-fresh vegetables, honey from my own apiary...

Thanks for the compliments, Rod! Soon there in the beautiful Pac NW, buddy!

Damn, now I'm hungry for fresh garden produce. The yellowing on the squash is more than likely from over watering. Hugs.

I was looking online to see if I could find an explanation for the brown ends on your squash.

The only thing I could find that looks similar was at the following site,
http://edis.ifas.ufl.edu/PP160

Scroll down to the section on Wet Rot(Blossom Rot) It looks like what is happening with your squash, just on a larger scale.

I hope the info helps at least a little. :)

Oh and thank you for the well wishes on the post from a few days ago. I tend to think it was just my allergies acting up double time for some reason.

Forgive you? there is nothing to be forgiven, we all get sidetracked from time to time, it's all good, my friend.:D

Have an excellent day!

Felinae-- Thanks so much for the link! I just three minutes ago picked two good, ripe ones off the vine; am going out to water, weed and do general maintenance (my excuse to sun the shoulders, sans shirt! HAHA!). I'll investigate upon return.
Glad you're feeling better, Lady!

Ah, Xanadu! What a pleasant surprise indeed! Just the name... takes me to the mystical plane!

Overwatering was one of the thought-lines... Thanks! I'm moving the vines inasmuch as I can, to allow more direct sunlight to the blossoms and fruit. I tell ya, the squash just wants to TAKE OVER...

Thanks for showing up @ My Song, pretty Lady! nice smile-producer, on a Monday of all days!!!

The garden is looking fabulous! I really need to grow some cantaloupe! They are $4.00 each out here!!!!

Oh no you don't...you are simply not allowed to abandon any plans in regards to the Hills dang it!

This is an odd year (I say in an excuse like tone)...well, so was last year...dang, not making progress am I?

It's all good though Cyg...it may start out cold and wet but I can pert near guarantee ya a big crop come the end of the year. We had to let way too much go last year, not enough space to put it all up...probably do the same this year!!

My the fruit and veggie gods shine on your Tejas garden...and the overbearing Houston heat drive ya to the cool Ozarks, lol.

Ozark Momma...
When put in terms so inviting... the garden crop could cull by half, yet I'd not miss ONE BLUSTERY NIGHT, given proper warm company..lol!

Cool to hear the season there makes up for it's 'shortness' with prolific abundance...