NECTAR OF THE GODS, MY FRIENDS!!!

So, I had these green beans-- nearly a half-pound-- chilling in the 'fridge.I thought I had two ripe squash also, whence a third, fresh-picked of the night, would be added. I didn't-- I had THREE: 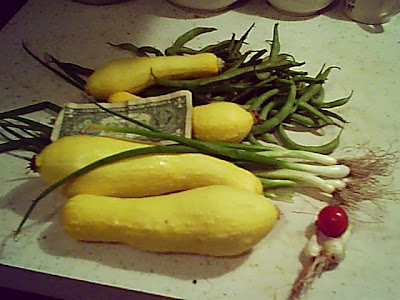 And un ultra maketh four...[Ended up using only the two smallest. And am STILL FULL!!! HA!] I dug two garlic cloves [there by the bitty tomato-- the second red one of me biggest bush. (Get yer minds outa the gutter! We're here to cook and eat!) {I ain't helpin', is I!?!}] out of the dirt, and a bunch o' yunguns (onions to you yanks! hee!) to add some eye-water... 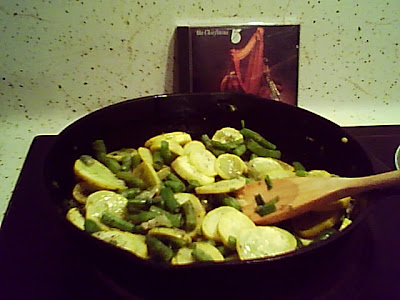 One of the MOST important ingredients of the night-- THE CHIEFTAINS on c.d. LOUD, because I could, and it should be. Tonight I rule the abode...{MORE THERE LATER, COHORTS!}

NOW let's see what, when dished up, split in three, and covered, thirds, in shredded cheddar, parmigiana, and soyu, we can consume... 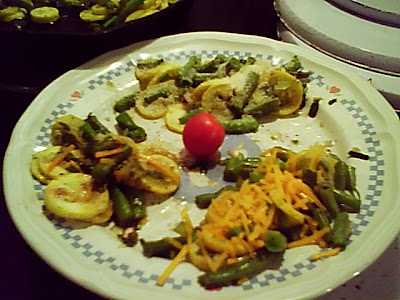 GOOD HEAVENS, FOLKS...
Rather, Goods From The Heavens.. from The Earth [est-ce que la meme chose a la paganus...]

The flavor from fresh-from-your-backyard CANNA BE BEAT. The mass-produced grocer's hybrids are simply LAME-O when considered side-by-side...

Add the joy of having done it ALL yourself [ok; we put a seed in dirt, let the sun shine, the rain fall, and claim "WE!" HA!!! SHE... Mother of all Mothers, Gaia...] is... undeniably smile-producing!

Cygnus
Posted by Cygnus MacLlyr at 04:57

Labels: i eats me veggies...

Add sliced 'taties, sausage, tomato (unless it's in cast-iron, then leave 'em out), and some time slow-cookin' the lot and you get one of my Mum's favorite summer suppers.

Now more than ever, I wish I had a garden. Oh, well - there's always fruit trees next year, and maybe pot and trellis for cucumbers (the Evil Genius is mad for cucumbers, bless him). One may dream.

Meanwhile, one may purchase from local farmer's markets.

Sleep is perchance to dream...

I think i love mum already.. ne'er woulda thought to mix taters in with the YELLOW ones, but am thawing out sarsage-- and just bought taters 2nite...
Guess who's for.. uhm.. i mean WHAT'S for dinner menana???

For a night-long (and longing) smile...

Hey there dude! I don't even care for squash all that much but those images are yummy.

I completely agree with you about homegrown veggies vs. store bought. I paid $4 to an Amish fella for one quart of strawberries at the farmer's market this weekend. That's expensive but they were worth it!

Debra She Who Seeks said...

Hey, I love the artful arrangement of the stir-fry on the plate, with that lovely little red tomato in the middle! Presentation is everything, as the great chefs admit!

Darn, that looks yummy! Wish I was there to taste it.

Glad ya getting so much joy outta ya gardin! :)

Looks like YUM! (And dollar bills make for such a lovely garnish!)

I agree-- you got a good deal!

Get some good home-churned cream to go with them?!?

Don't guess there'd be any leftovers, eh? Ah well.. I can hope the breeze carries true and strong!

Thanks for coming by!

Deborah... and I worried all day it was too damned REAL, not pouffed-up enough for lens-flirt.

Sure DIDN'T abed the taste any, though! Hee!

Thanks, Lady! Have a good evening!

Lady Edain--
I was thinking about you today-- realized yours is one of the spots i've missed the most of late (see tonight's post...)

I'm thankful that with a little diligence, some water, and not much else on my part, the Sun and Earth give me bounty and call to mind the Cycle of Creation, Sacrifice, Return, Rest, and... SPIRAL AGAIN next season! :D

Thanks for coming by, my Canadian friend!

SPARKLE!!!
Certainly better for breath than them copper pennies-- and easier to chew, too!!!

SO VERY GLAD to see you again, sweetie! I'll be over in a sec-- but as hungry as ol' Cyg is cest soir, y'better have at least a finnif ready... HAR!!