You probably call it Easter.
Deviled, anyone?

Welcome to the first Sunday after the first Full Moon after the Spring Equinox.
What a lovely way to time a holy day! I'm liking this gig already...

[the following is culled from Wikipedia] 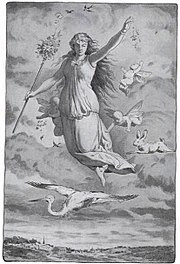 The modern English term Easter developed from Old English word Ēastre or Ēostre or Eoaster, which itself developed prior to 899. The name refers to Eostur-monath, a month of the Germanic calendar attested by Bede as named after the goddess Ēostre of Anglo-Saxon paganism.

Using comparative linguistic evidence from continental Germanic sources, the 19th century scholar Jacob Grimm proposed the existence of an equivalent form of Eostre among the pre-Christian beliefs of the continental Germanic peoples, whose name he reconstructed as *Ostara.

In all modern Celtic languages the term for Easter is derived from Latin. In Brythonic languages this has yielded Welsh Pasg, Cornish and Breton Pask. In Goidelic languages the word was borrowed before these languages had re-developed the /p/ sound and as a result the initial /p/ was replaced with /k/. This yielded Irish Cáisc, Gaelic Càisg and Manx Caisht. These terms are normally used with the definite article in Goidelic languages, causing lenition in all cases: An Cháisc, A' Chàisg and Y Chaisht. 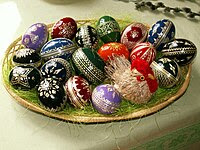 Easter eggs are a popular sign of the holiday among its religious and secular observers alike.

As with many other Christian dates, the celebration of Easter extends beyond the church. Since its origins, it has been a time of celebration and feasting and many Traditional Easter games and customs developed, such as Egg rolling, Egg tapping, Pace egging and Egg decorating. Today Easter is commercially important, seeing wide sales of greeting cards and confectionery such as chocolate Easter eggs, marshmallow bunnies, Peeps, and jelly beans. Even many non-Christians celebrate these aspects of the holiday while eschewing the religious aspects.

Throughout North America, the British Isles, New Zealand and Australia the Easter holiday has been partially secularized, so that some families participate only in the attendant revelry, central to which is (traditionally) decorating Easter eggs on Saturday evening and hunting for them Sunday morning, by which time they have been mysteriously hidden all over the house and garden. Chocolate eggs have largely supplanted decorated eggs in New Zealand and Australia. 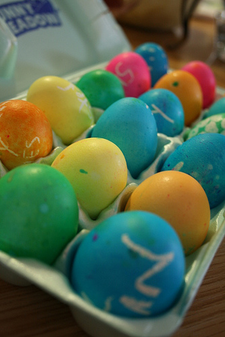 In North America, Australia and New Zealand, parents often tell their children that eggs and other treats have been delivered and hidden by the Easter Bunny in an Easter basket which children find waiting for them when they wake up. Many families in America will attend Sunday Mass or services in the morning and then participate in a feast or party in the afternoon; the food cooked for the feast and the customs practiced at the feast may be influenced by Jewish cuisine and the Jewish holiday of Passover.

In the UK children still decorate eggs, but most British people simply exchange chocolate eggs on the Sunday. Chocolate Easter Bunnies can be found in shops. Many families have a traditional Sunday roast, particularly roast lamb, and some eat Easter foods such as Simnel cake, a fruit cake with eleven marzipan balls representing the eleven faithful apostles. Hot cross buns, spiced buns with a cross on top, are traditionally associated with Good Friday, but today are often eaten well before and after. In Scotland, the north of England, and Northern Ireland, the traditions of rolling decorated eggs down steep hills and pace egging are still adhered to.

In the British Overseas Territory of Bermuda, the most notable feature of the Easter celebration is the flying of kites to symbolize Christ's ascent.[48] Traditional Bermuda kites are constructed by Bermudians of all ages as Easter approaches, and are normally only flown at Easter. In addition to hot cross buns and Easter eggs, fish cakes are traditionally eaten in Bermuda at this time.

Easter eggs are specially decorated eggs given to celebrate the Easter holiday or springtime.

The oldest tradition is to use dyed or painted chicken eggs, but a modern custom is to substitute chocolate eggs, or plastic eggs filled with confectionery such as jelly beans. These eggs are often hidden, allegedly by the Easter Bunny, for children to find on Easter morning. Otherwise, they are generally put in a basket filled with real or artificial straw to resemble a bird's nest. 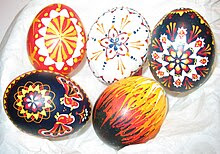 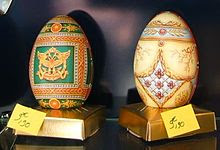 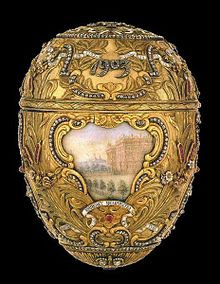 The egg is widely used as a symbol of the start of new life, just as new life emerges from an egg when the chick hatches out.

The pre-Christian Saxons had a spring goddess called Eostre, whose feast was held on the Vernal Equinox, around 21 March. Her animal was the spring hare. Some believe that Ēostre was associated with eggs and hares,[3] and the rebirth of the land in spring was symbolised by the egg. Ēostre is known from the writings of Bede Venerabilis, a seventh-century Benedictine monk. Bede describes the pagan worship of Ēostre among the Anglo-Saxons as having died out before he wrote about it. Bede's De temporum ratione attributes her name to the festival, but does not mention eggs at all.

Pope Gregory the Great ordered his missionaries to use old religious sites and festivals, and absorb them into Christian rituals where possible. The Christian celebration of the Resurrection of Christ was ideally suited to be merged with the Pagan feast of Eostre, and many of the traditions were adopted into the Christian festivities.[5] There are also good grounds for the association between hares (later termed Easter bunnies) and eggs, through folklore confusion between hares' forms (where they raise their young) and plovers' nests.[6]

Cygnus
Posted by Cygnus MacLlyr at 01:41

Whatever people celebrate the holiday for, I love it. I want to color Easter eggs every year but seeing as how we don't have children yet it would probably be a little strange. :-) Hope you get lots of egg salad. LOL

Lazy-- WHO needs children to color eggs? DO IT, LADY!!! YOU BE THE CHILD!

Come on, now... it's a holiday, fer crisssake (sorry if I'm being sacreligious there...)

Exala, yes; I'm sure there will be no shortage! LOL!

Thanks, Donella! Nice to have your comments, Lady!

I think Donella should color eggs too...my fiance's son and I colored eggs tonight and we had a blast and now the Easter Bunny is very tired and needs to go to night night!

NOW NOW NOW life is right, folks! My most favorite Misadventurous Mommy in the world has been resurrected!!

May I offer the Bunny a pillow?

Ah, you forgot the goddess from Egypt and her son Tamar(?) which is why ham is a part of the Easter tradition.

Happy Holiday to you. We are examining beliefs and it seems strange/wrong to take another's & reuse it. If Christian's can get so bent out of shape about their holidays shouldn't the same respect be given to others? Yes I know its not very ho ho ho but that's the way my brain works. (makes one popular at church too, lol)

Stephanie-- I'll be looking her up as soon as I leave keyboard. (the post was all wiki's, so... didn't mean to neglect! ha!)

Not exactly sure on interpreting that second paragraph... but yes, ANY church has folk who aren't so open to wondering...

You have a really nice egg-cellent Sunday, Lady S. :P

Well at Christmas the Christian community seems to get its tail into a real twist about the meaning of the season and leaving Christ in Christmas and all that other stuff you hear about. But...most of what is celebrated was once someone else's religious ceremony & has nothing to do with Jesus or the Church. So...if you want others to celebrate *correctly* maybe we need to show the same respect. Eastar/Ishtar was/is someone's goddess...should Christian's be claiming that holiday & traditions? and all the questions that go with that.

yeah I think alot. yeah it makes me real popular when it gets suggested that Sunday isn't the day Jesus rose, December 25 isn't his birthday, and...well as a pagan you have had to examine your beliefs, life and traditions. Just a different perspective. No converstion talk, no telling others they are wrong, just my musings & rambles. Now if you want to tip-toe away...lol...you wouldn't be the first.

So happy holiday, no matter what your flavor...we are being lazy today & listening to the kids play with their flap...cause fart noises are always joyous aren't they?

ooop that should be *flaRp*

tip-toe away me left bumcheek!

I LOVE this kind of discussion, or line of thought.

Yes, I've read that scholars are in general agreement that Jesus of Nazareth was born about "4 B.C." [a Man before His time! Har! couldn't resist;D).

The same timing of the Festivals is actually a fairly wide-spread tradition for any overtaking society; find parallels in the meanings of the Holy Days and say to the conquered "ok, we'll still have That fest on That day, but we'll call it This in honor of(fill in deity of the day) in lieu of..."
Made the bondage less oppressive.
Dig? or are you to=]ip-toeing away now?:D
Somehow, I bet not!

Thanks, Stephanie. You're one of the most lively, interesting and informed of all the readers here. Great to have you visit, Lady!

Who me? lol... nah thinking about what is real in a/my religion and what was added in is something that has been brewing for a long time. Add in the mix of Libertarian ideals & Christianity and it can get interesting. But most do not want to think about it because it means self-examination an possible change.

So if one group wants respect & the right to practice their own beliefs, shouldn't that extend to others as long as nobody is getting hurt? (L idea but irritates C). So what is respect? Does taking their festivals or symbols and changing the meaning being respectful? Really the colored eggs, bunnies prolly wouldn't bother either group but does that make it right? Is it still respecting our own beliefs or is it a compromise? Sooo...sometimes I need an asprin because how do you turn off your own brain?

But we have had a lazy day. One day the rain will stop long enough to create a new garden for the pasture. Besides, in 25 years of having kids, we have only ever gotten those eggs done on time twice. It is still fun days later & then it is just a fun way to welcome spring. (cue music) "It's raining again..."

Yes YOU! LOL!
Precisely because you AREN'T afraid to examine, question, and otherwise philosophically pontificate...

"Makes me sit up and take notice..." as one beautiful soul recently quipped ...

change is difficult. but inevitable. we who don't fight it (so much as..)... dunno. Just seem to ponder more. Yes?

Welcome away! Fun is Fun; doesn't need to be scheduled any specific day...

Hi Cygnus, A very Happy Easter to you!

Thanks for posting that info, there is so much I didn't know, very interesting!

Stephanie, people are so indoctrinated they will fight to the end for something they don't even comprehend. Because it is their *belief* Yet they have no clue to it's meaning they just believe it because it is what they were taught. Sigh.

You are right, but how many would listen?

Hope you enjoyed your day!
:)
lydia

And a very happy one to you, Lydia!

And, as always, great comments!

Me and the Hermit were discussing this today-- how so many follow a tradition simply because they know no other.
Programming, as Lydia said.