MollyMaroon, Garden, and Beating Off in the Park..

Well, I replaced the 02 sensor in the Buick. 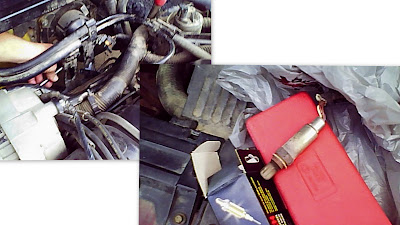 To no avail. Ah, the old one likely weren't good anyhow-- but neither is the car $55.00 later.
Still got nickel-and-dime stuffs I could attempt, but I think we'll send her to the mech and end it all once and for.. uh.. a week or three! ha! Just being realistic... because I ken brakes aren't too far down the needs-list... 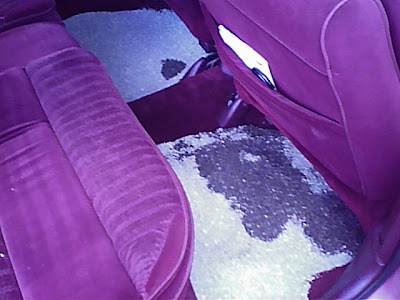 Those, and the simple act of vacuuming the cat litter placed in the floorboards to soak up the remaining moisture of the tadpole spawning grounds created after last weekend's rains. Didn't do so today; did scoop out the passenger back floorboard tripe, and replace it. To the good, it seems to be working well-- the litter absorbing the moisture enough to keep the mold and subsequent stench from setting in. Diligince. Not my middle name, but.. gotta do, eh?

It's all good. Life happens.

Despite the (other than financial) break-evenness, I still took time to meander down to a local park and give some practice time to the bodhran. 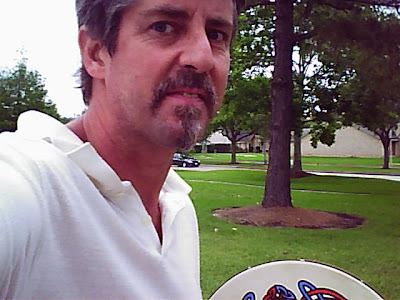 I can safely say that we get on rather well, that drum and I... I shot some video, but haven't chanced a glance yet. Maybe you will, if it seems okay (I mean light, angle and all-- not expecting to be progeny on day one of practice, ol' Cyg.. :D)

OH! And the garden-- how could I forget THAT? 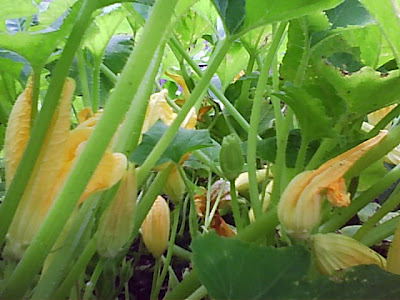 Tomatoes are on steroids, apparently-- au-natural, though, so let 'em go. 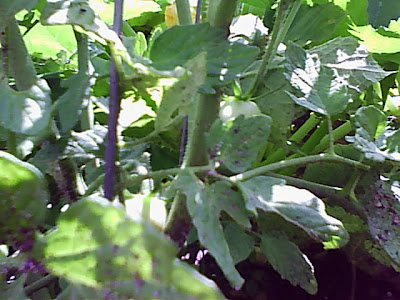 Peppers are finally getting enough heat to commence real growth: 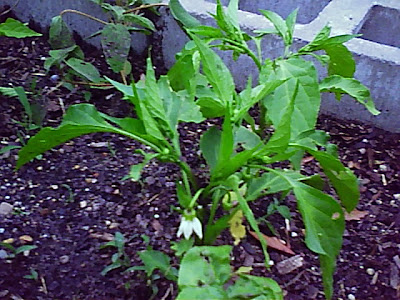 Wish I could say the same for the green beans, but they just aren't wont to gain upwards. Yet, even the runt is beaning out.. so... 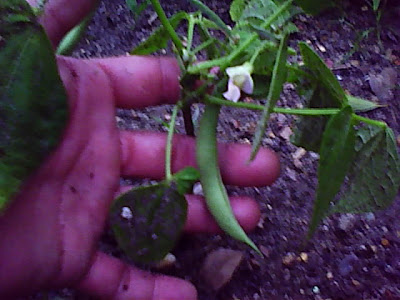 [this plant is less than 7" tall, folks-- almost shorter than the bean produced! I can't help but be tickled!!]

Hope everyone has had a FANTASTIC weekend! We'll see yall on the morrow...

Cygnus
Posted by Cygnus MacLlyr at 00:50

Your garden is looking great. We can not even start thinking about starting one yet still freezing at night here.

Thanks Rod. It really is a boon, this nearly nine-month growing season.
Kinda (and the term 'kind' is a loose use, yo?) a mixed blessing-- summers with the mercury well over three digits and humidity near the same...
Makes great okra croppins' though! har!

Thanks for the compliments, Rod m'Man!!

I agree, garden looks good. I hope the color is off on your camera...if you have purple pimp upholstery in your fine ride, you may just have some closet Californian in you....

Well, Cat.. My camera, or computer.. or your'n... somethin' ain't right if we gots purple pimpage...

Thanks for the chukkle, man!

I am jealous! Haven't even planted ours yet - another couple of weeks to wait! Looks great!

Had a great weekend here brother, super nice sun the whole time. Lovin that Molly ride more and more, hope ya get her feeling better. Garden is alive with growth and looks great. Gonna spend some time on the ol tractor in the morn and try to get some things in the ground too. Nice post and pics my man.

Bullseye-- way Happy to hear your weekend was good.. I ken that goes deeper than the physical sunshine, and I rejoice, Brother...

hiya Ernie! I'm anxious for you to be able to break ground! Nothing more rewarding...

Thanks for the visit! Hope the season warms all the more quickly for you!

Debra She Who Seeks said...

Hi Cygnus -- I've tagged you for the "Seven Facts About Me" meme, if you feel like doing it. All the details are available on the April 27th post at my blog. Have a nice day!

The garden does look good.

Oh and I'm on a different computer than Cat and I'm seeing a purple interior too, but I liked it. :D It reminded me of my metallic orchid 66 mustang I got as a high school graduation present.

Awww shoot, I wont get to see the infamous Molly Maroon in person. Oh well maybe some other time.

Have a great day!

I'm seeing purple, too. Pretty purple, but purple all the same.

Debora-- I'll go look for the details and save the materials for tomorrow night. Thanks! Always nice to not be in a quandary for writing materials!

Hi Felinae!
OK, so yall's computers are as fine as this one is (likely better); I admit, after looking at the post:
I Be Pimpin'!!!lol!
She ain't that hip in person, just solid ol' maroon...

thanks for the words, Lady!

Yes ma'am, we got purple...I don't know if it was the lighting, the camera, the durned car playing yet another trick on me (wouldn't put it past her to have a bit o' chameleon in 'er)... Rest assured, I ride in style, but not THAT style!ha!

Thanks, Lady D! Always a pleasure to get a visit from you.
take care, now!