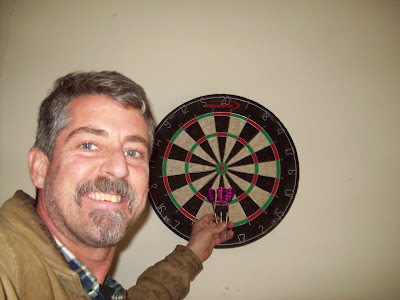 I Can Call This Place Home

Taco meat is on the range: nachos for the superbowl.
I have a nice screwdriver at the ready-- replete with a very smooth Russian import.

But those aren't the reasons.

The folk lovingly refered to as "the Trolls" [they roomed in the downstairs section of the casa] officially moved out. But that's only a contributing factor.

"Contributing how, oh Swan of Swans?" I can hear you asking thru the eather-- or ether, or airwaves, whatever your modus communicati.

Well, I could tell ya, but wouldn't you rather I show ya? Hun huh wouldn't ya huh??!

Several stack-racks of bowling balls -- one of the trolls is an avid bowler-- and large tool boxes were cleared from the garage. No, I dinna move my vehicle in; I did something far, far more important with the space... 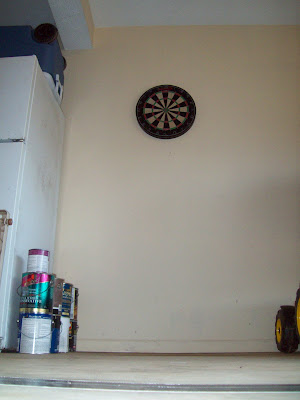 Now to stock the reefer with frothy adult beverages and get an erasable board-- but even those are extraneous. Well, not really, but...

I DID throw my first round, 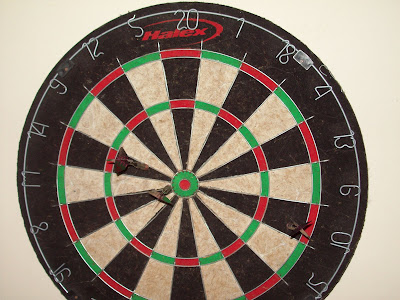 and it only took me four darts to find me mark: 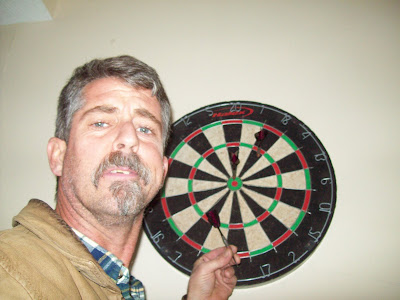 The fifth woulda been there, too, mais alas-- wire-spit! So it goeth sometimes...

Anyhow, folks, y'all have a good night. I gotta go make coconut margaritas in honor of the Lady of the House's watching the game from somewhere in the Carribbean Sea-- we'll be watching together, if vicariously! ha!

Slainte, folks! Hope the Saints not only lose but loose hard! HA!!!

Cygnus
Posted by Cygnus MacLlyr at 23:03

Ha! The Saints won!
Take That Mr.Hat Trick!
Oh yeah, I play darts too,just not hard tips.
I'm not half bad either, I have thrown a few Hat Tricks in my day.

What a handsome man!
I have to admit,I,too,was rooting for the Saints. I kept imagining you were here and we had fun with our friendly rivalry.
The dart board brings back some fond memories of my beautiful home in Texas.
Love you.

P.S. Thank you for always being so complementary and loving toward me. I, like most parents, always wonder if I did enough of the right things!

I used to play darts back when we used to go out drinking a lot. I was pretty decent, really. Fun game.

We have the same little riding tractor, btw. :-)