We've had a nice summer thunderstorm roll through the nation's fourth largest city today, wreaking a little havoc with the computer. Just enough rain, really, to raise the humidity enough to match the triple digit temperature...

Speaking of computer havoc-- what in the world happened with last nite's blog here?!? Some were able to read it, others were not...
Clues are still coming in, but I apologize to those who had to read the thing hieroglyphic-style, like a meant-for-your-eyes-only espousal. I reposted it in "humanspeak", but left the original because it was too darned curious (and funny! Mad as I was, I couldn't be kept from laughing!), and because I had a comment or three before I even began to have a clue what in the sam hell MAYBERRY was talking about! ha!

[ON A SERIOUS ASIDE... THOSE OF YOU WHO LIKE YOUR FIRST AMENDMENT 'RIGHT' NEED TO VISIT MAYBERRY'S SITE, AND WRETHA'S AS WELL...]

Anyhow, tonight I thought I'd pass on this bit of insight from my friend Spotted Wolf...


Why do we call the last one generation Y? I did not know, but a cartoonist explains it eloquently below... Learned something new today! 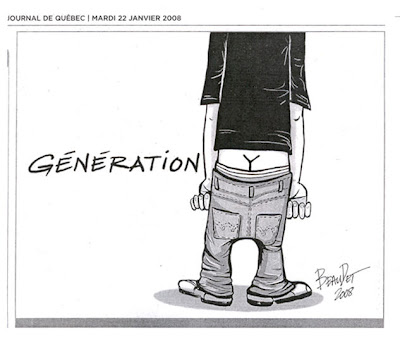 And thank you all for the patience with last nite's fiasco! lol!

Have a great evening, folks!

Cygnus
Posted by Cygnus MacLlyr at 23:50

Here's the remedy for generation y:

My aunt and cousin were exiting a mall one afternoon. My cousin wore his pants in that fashion - at half mast. As they left the building, a matronly woman was entering. Without missing a beat, she smiled at my cousin, and in a kindly voice said "Oh, don't worry, sweetie, you'll grow into them some day" while waving at his trousers.

He pulled up his pants and never let them drop that way again.

girls have this problem too, but there is a fix....

Weird stuff goin' on Cyg, all over.... As to "generation Y", all I got to say is UGH! Hike yer drawers up ya idiot!

Hey my brother, how's it been. Bloggers all across the board have been having troubles it seems to me. Something is going on I'm sure of it. lol No, Really !!

Generation Y, got to love that man, so true in so many ways too.